What You Need to Know About Elm Seed Bugs 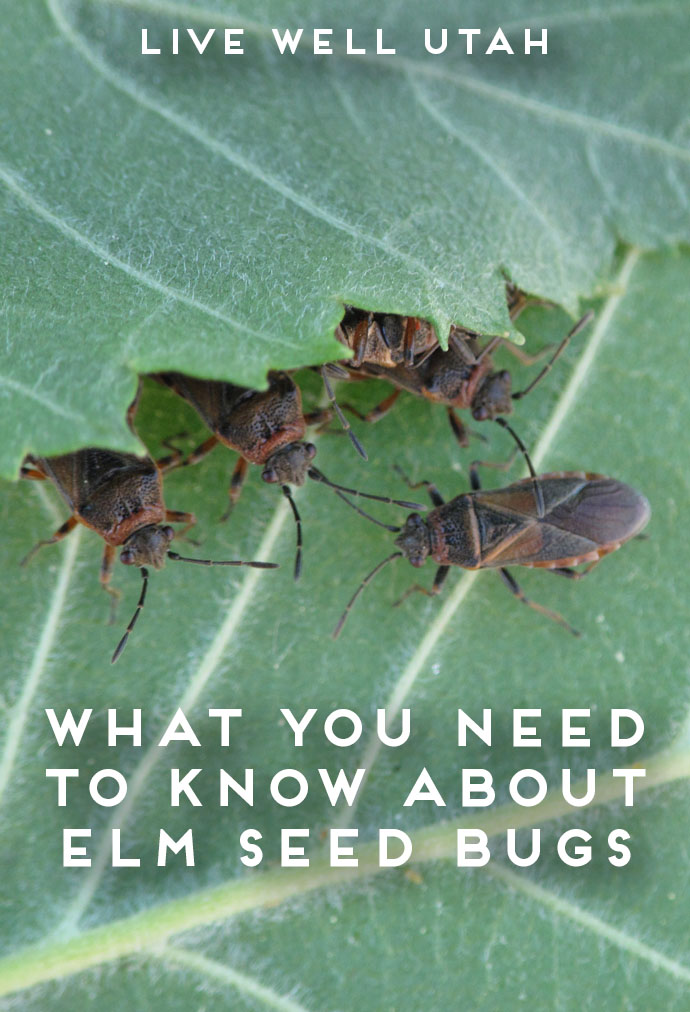 There’s a New Pest in Town

The elm seed bug has been recognized as Utah’s newest pest. It was first discovered in Utah in July 2014 and confirmed by the Utah State University Extension Utah Plant Pest Diagnostic Lab and the U.S. Department of Agriculture, Animal and Plant Health Inspection Service. The elm seed bug has now been widely reported along the Wasatch Front, Cache County, east to Duchesne County, west to Tooele County and south to Grand County.

“We have received an abundance of calls about this pest over the last few weeks,” said Ryan Davis, USU Extension arthropod diagnostician. “People want to know what this pest is and how to keep it from coming into their homes.”

“Be aware that elm seed bugs can emit a pungent odor from scent glands, similar to bitter almonds, and they will leave unsightly fecal spots behind,” he said. “When many of them are gathered indoors, they will even land and crawl on people, but they are not considered a health threat.”

Davis said elm seed bugs enter structures through cracks and crevices, but most commonly through windows and doors. Any gap in weather stripping in a window or door is an open invitation. New windows, and even picture windows, are susceptible to elm seed bug entry.

Tips for keeping the pests outside include caulking foundation cracks and gaps in soffits and around plumbing, gas or electrical conduits; sealing windows and doors with sealant or weather stripping; and making sure all screens fit tightly. In addition, vacuuming the bugs is effective. Be sure to dispose of or freeze the vacuum bags before reuse. If using a vacuum with a hose extension, insert a knee-high nylon stocking into the hose end and secure the open end around the hose end with a rubber band. Vacuum elm seed bugs, then remove the stocking with the bugs, tie it shut and throw it away. Keep in mind that this method may cause elm seed bugs to emit their foul-smelling odor. For larger-scale exterior vacuuming, fill a wet-dry vac with approximately 1 inch of water and a dash of dish soap to drown the bugs.

Davis said residual pyrethroid insecticides can help reduce elm seed bug entry when applied around the foundation, windows, doors and to the undersides of eaves, but complete control will be difficult. Products commonly labeled for these application sites contain active ingredients such as beta-cyfluthrin, bifenthrin, deltamethrin, cyfluthrin, cypermethrin, lambda-cyhalothrin and permethrin. Be sure the intended target site is listed on the product label.

“It will be interesting to see how the elm seed bug saga plays out in Utah,” Davis said. “Hopefully its presence as a nuisance pest will moderate, but only time will tell. Until then, Utahns now have to deal with boxelder bugs in the spring and fall, and elm seed bugs during the summer. Compared to boxelder bugs, however, elm seed bugs are smaller, more difficult to keep out of homes and structures and they emit a foul-smelling odor from their scent glands. If these pests have been a problem in your home, it is worth the effort to try and exclude them for the long-term.”

Ask an Expert // Four Tips for Getting Rid of Eerie Earwigs 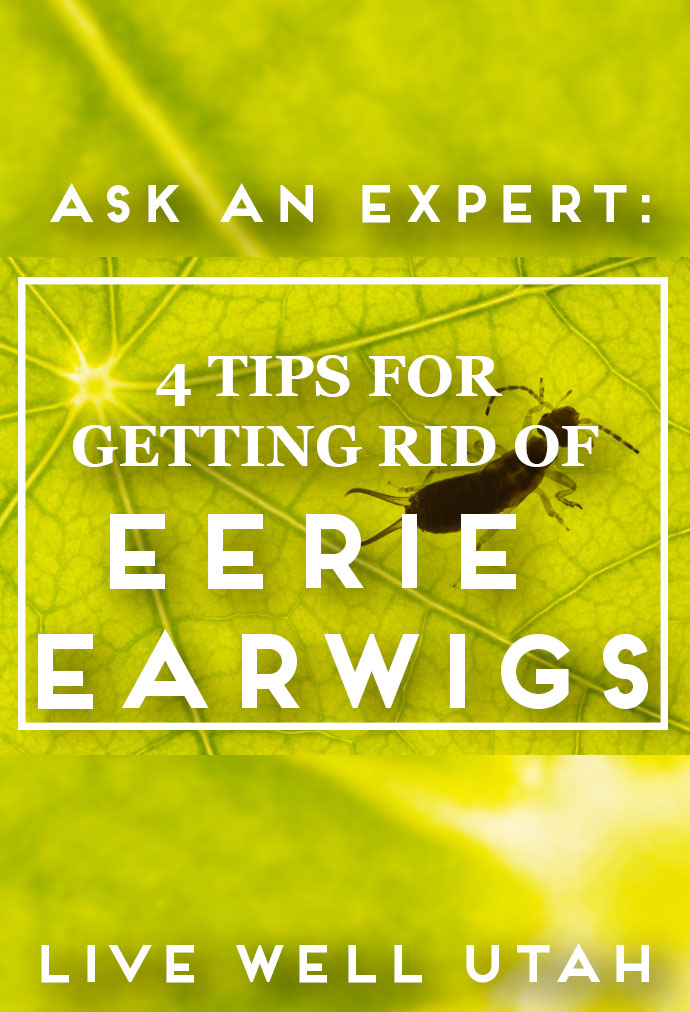 Earwigs can be creepy, and while they don’t actually crawl in your ear, they can cause some serious damage to the plants in your garden. Learn how to keep them at bay with these four expert tips.

European earwigs are common in Utah and are easily recognized by the large pincers on the end of their bodies. The ideas that earwigs crawl into ears and that their pincers are dangerous are both false.

Earwigs are active at night and often go unnoticed; however, holes chewed in leaves can indicate earwigs have been dining there. If you suspect that earwigs may be eating your plants, examine them at night with a flashlight. Earwigs can be beneficial, acting as decomposers and predators of insect pests such as aphids and scales. However, they also feed on many vegetables, leafy greens, flowers and a wide variety of fruit. Since they spend the winter as adults, they can also become an indoor nuisance pest. Consider these tips for ridding your home and yard of earwigs.

1.)  Homemade traps are inexpensive and can reduce earwig numbers in specific areas. One type is made from corrugated cardboard. Cut a 6-inch-wide strip of cardboard and roll until it reaches about 4 or 5 inches in diameter. Tie the roll with string to keep it intact, then tie it to the lower trunk of a tree. Collect the cardboard traps every two or three days, seal the earwigs inside a bag and throw the earwigs and the trap away. Rubbing the cardboard with fish oil or bacon grease can make the trap more effective.

2.)  Another type of trap is a sour cream, cottage cheese or margarine container with strong-smelling oil, such as fish oil or bacon grease, poured into the bottom. Bury the container in the ground almost to soil level, and cut a small hole in the lid for the earwigs to enter. The containers can be collected every few days and reused after the earwigs are dumped into a bag and sealed.

3.)  Commercial, non-chemical control products are widely available, such as diatomaceous earth. This product is not harmful to pets or humans, but works by cutting or absorbing the thin, waxy layer that covers insects. Sprinkle it around the base of plants that earwigs and other insect pests, such as aphids, scales and caterpillars, are damaging. Be aware that once diatomaceous earth contacts water, it becomes ineffective. It must be reapplied after rain or watering. To keep earwigs out of fruit trees, try wrapping sticky traps, such as Tangle Guard, around the tree trunk.

4.)  Occasionally, it may become necessary to spray an insecticide to effectively control earwigs. Organic and reduced-risk products are available such as pyrethrins and spinosad. Pyrethrins are derived from a species of chrysanthemum and control many insects. Spinosad is derived from a bacterium harmful to many insects but not mammals. Both are often labeled for use on many vegetables and fruits. Other chemical sprays are effective, but may harm natural enemies of earwigs and other beneficial insects. Of these available to homeowners, carbaryl (Sevin), malathion and permethrin are commonly used. Using non-chemical methods before resorting to sprays is recommend in most non-commercial situations.

A video about making homemade traps is available at https://youtu.be/tlgpfCT0wYo.

Getting Rid of Scary Pests Without Scary Chemicals 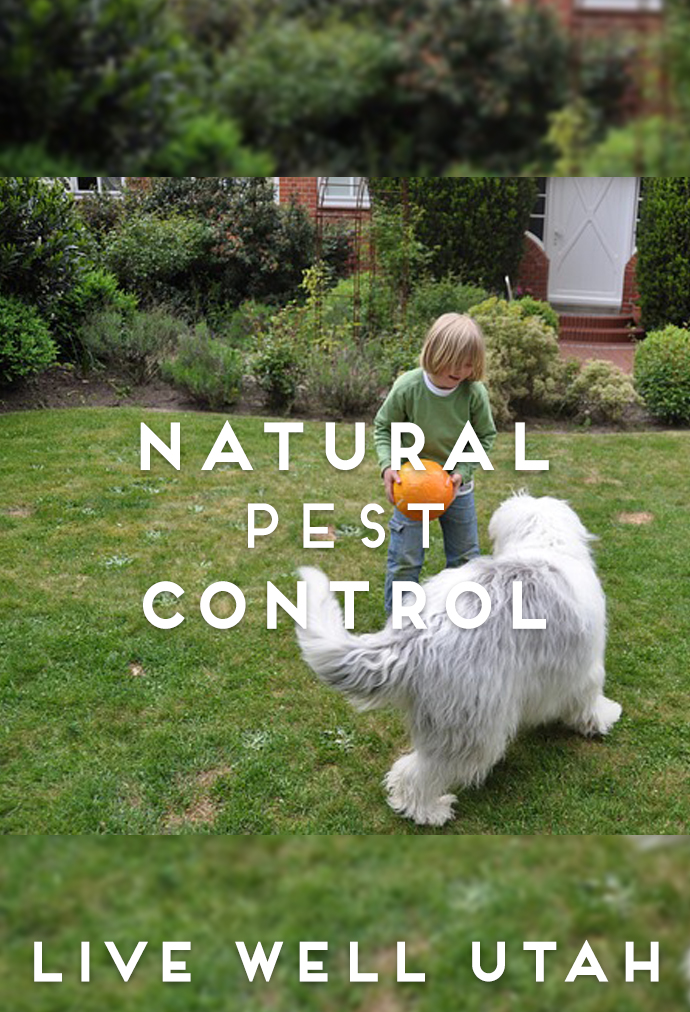 There’s no need to put your family at risk to get rid of pesky pests!

Going Back to Basics

Have you noticed a few more guests showing up to your parties recently? Some people may say, “The more the merrier,” but guests that walk with more than two legs should not be invited into your house!

If you want to get rid of unwanted houseguests without hurting the ones that are already welcome, check out this video on natural pest control featuring Teresa Hunsaker. Now it’s easy to get rid of scary critters without using scary chemicals! 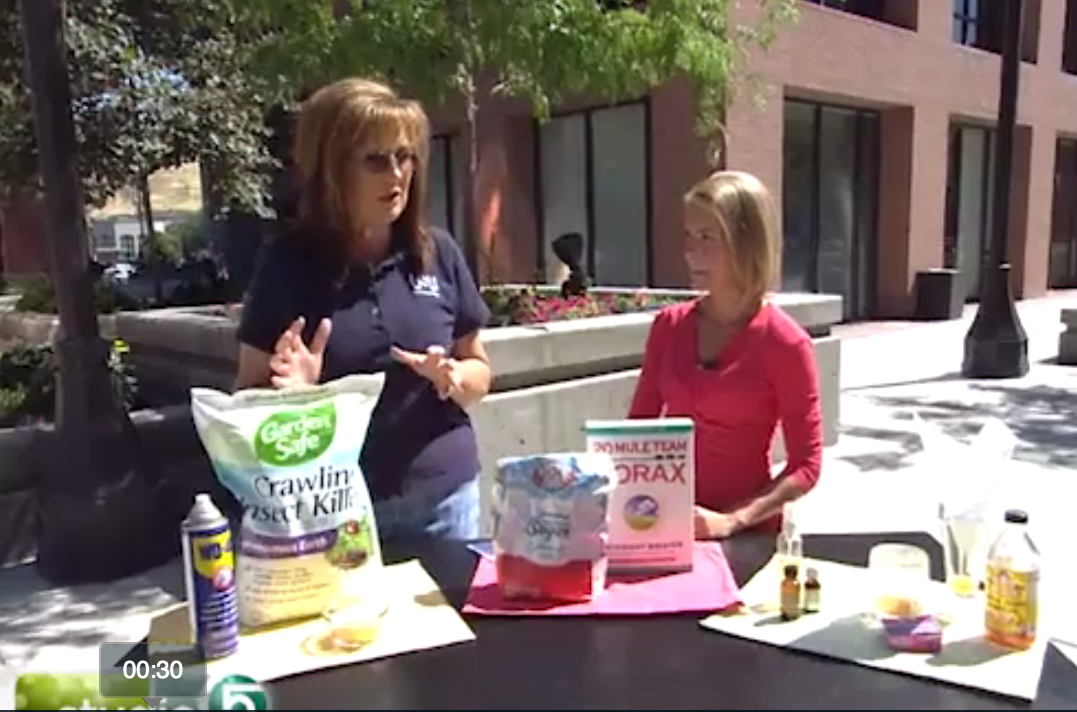