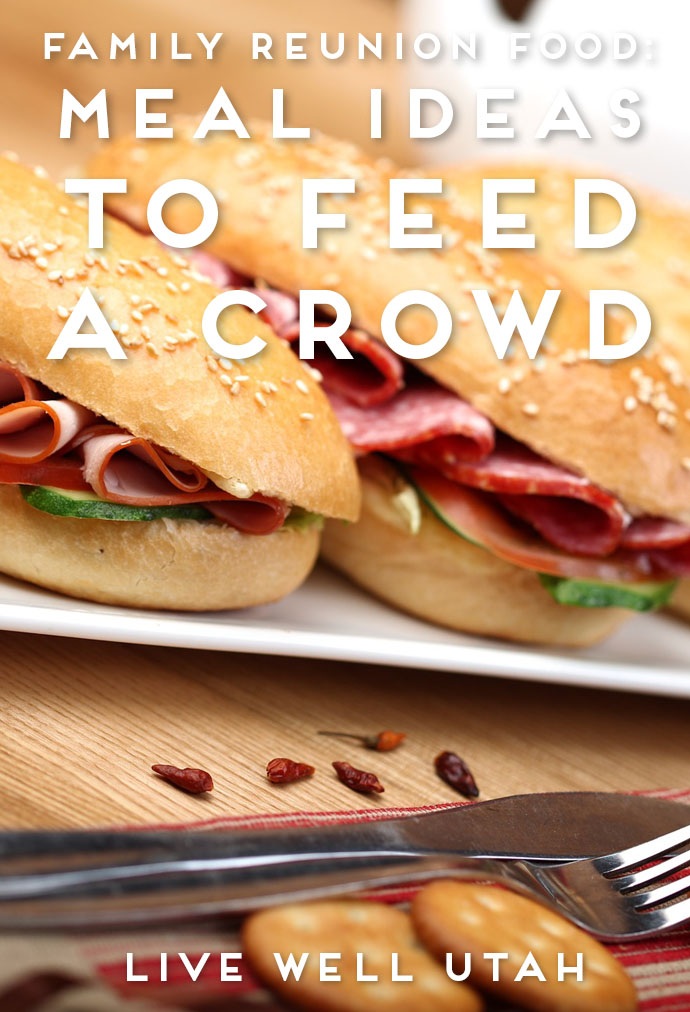 Because our extended family has extended throughout the country, our family reunions extend as well. Last year 66 of us descended on Oriental, North Carolina. It was wonderful! The last thing any of us wanted to do was spend time making food, but an army travels on its stomach!

The first day of the reunion when everyone starts gathering, people often arrive at odd hours. An easy meal to accommodate this is a large taco salad bar. The taco meat can be kept warm in crockpots on low, as well as the corn. The rest of the ingredients are not temperature sensitive and can be in covered containers on the table.

Our next day called for a beach picnic—the ocean was an hour away, but after traveling across the country from Utah, what’s another hour? We made sandwiches to take to the beach, and to finish up the lunch, we had 80 boxes of juice, 75 bags of pretzels and chips, 1/2 a box of apples and 40 clementines.Cut and wrap sandwiches well, then put in coolers of ice to keep everything at a safe temperature. Remember, this was for 66 people, with a fair amount of teenagers among them!

The Day Everyone Arrives Taco Salad

Directions: fry ground meat, drain, then add ketchup and seasoning mix and water. Heat up the beans and add to the meat. Put in crockpots on low. Be careful you don’t overload any electrical circuits—you may need to spread the crockpots around to different plugs.

Put the toppings — except for the corn — in medium-size bowls and keep the bowls filled as they empty. That way the vegetables will stay crisp in the refrigerator while the diners ebb and flow.

Subway Sandwiches for a Crowd

Slice the French bread horizontally through the loaf, spread Miracle Whip (or Mayo) on one side of the loaf, and mustard on the other. Layer the cold cuts, lettuce, tomatoes and pickles (or tomatoes and pickles could be kept in separate containers and people can add them later). Put the bread back together, slice it vertically into 8 sandwiches, then wrap four or five times with clear plastic wrap. Get the large, industrial roll of plastic wrap: it’s wider and easier to handle with a crowd. Make sure the sandwiches won’t get wet while in the ice.

This article was compiled and edited by Cathy Merrill, FCS Utah County